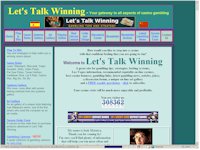 Izak has probably come out with the largest variety of systems. It seems every few months, he has a new system. He once even tried to sell “lucky numbers”. His web site is full of nonsense, but people must still be buying his material as he’s still in business.

While he hasn’t ever been known to pretend to be his own purchasers on forums as frauds like Mark Howe does, he still relies heavily on forums to promote ineffective systems. His systems are not expensive as some others, but you can be well assured if you buy, you are buying nonsense. None of his systems are original, and they are usually nothing more than rehashed older systems.

VERDICT: More nonsense. New losing systems are periodically released by him. None of them appear to show any promise.

RECOMMENDED: Download a FREE Roulette System That Works at www.RoulettePhysics.com